In September, the St Andrews team took part in a workshop and fieldcourse in Angola, hosted by the Universidade Agostinho Neto (UAN) in Luanda. The purpose of our trip was to outreach our work on alkaline igneous rocks and to learn more about similar rocks found in Angola. Our visit started with a day workshop on frontiers in the study of alkaline silicate rocks and carbonatites, which included presentations by Prof Adrian Finch and myself (University of St Andrews) and by Pete Siegfried of GeoAfrica Consultants (based in Namibia). GeoAfrica and St Andrews are both partners within the HiTech AlkCarb consortium, funded by the European Union.  Our visit was funded by the SFC ODA Global Challenges Research Fund as the first step in assessing opportunities for future collaborations between Angola and St Andrews for sustainable development of their mineral resources. The workshop was hosted by the Universidade Agostinho Neto at their campus in central Luanda on the Avenida Marginale, and was followed by 5 days of fieldwork in an underexplored nepheline syenite complex (Nejoio) in the remote northern part of the Namibe province.

The workshop in Luanda was attended by about 60 geologists working in Angola, including representatives from the University, the Angolan Oil company Sonangol,  recent Angolan graduates and many of the geology, geophysics and engineering students from the Agostinho Neto University.  At the workshop we presented scientific work on magmatic roof zones (Adrian), mineralisation processes in peralkaline systems in Greenland (myself), and on carbonatites in Namibia and South Africa (Pete Siegfried, GeoAfrica Prospecting Services).

Students of UAN showing us around the geological museum in Luanda

The workshop in Luanda was followed by a 5 day fieldtrip looking at peralkaline igneous rocks at the Nejoio complex in Southern Angola. We were based in the town of Camacuio in Namibe Province, roughly 6 hours north of Lubango, and at a c. 3.5 hour drive from the field site which lies on the land of the Muhumbi people. This visit was an opportunity for us to learn more about working in Angola and also to assist the Angolan geologists with the interpretation of their geology using our experience of similar rocks from Greenland, Brazil and Namibia. The group included Finch, Borst and Siegfried accompanied by Professor Aurora Bambi of the Universidade Agonstinho Neto in Luanda. The course was also attended by two recent geology graduates from St Andrews (Geraldine Tchimbali and Antonia dos Santos) and four current geology students from the Agostinho Neto University (Andre Eugenio, Egidio Lopes, Elizabeth Faria and Sergio Azevedo) who will use the field course as part of their undergraduate dissertations.

Local guides (and St Andrews graduate Geraldine) leading the way to Nejoio, viewed from the South

It was a pleasure and a privilege for us to work alongside the geologists from the Agostinho Neto University in Luanda, allowing us insights into the complex and fascinating geology of Angola, and allowing Angolan geologists access to the expertise we have acquired from rocks elsewhere in the world. A key objective of the project was to place Angolan geology within the broader regional context of South West Africa (i.e. South Africa, Namibia, Angola). 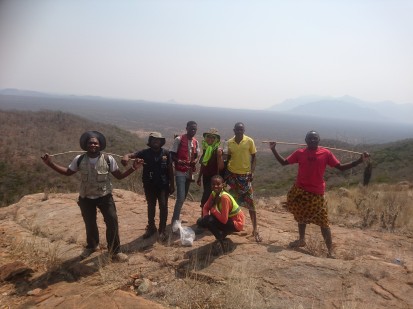 View from one the highest points on Nejoio’s outer ring 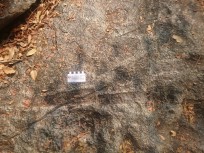 Complex crosscutting and deformation relationships at the margin of the intrusion

Our local guides leading the way

Nejoio is spelled in different ways, including N’DJOIO, NANDJOIO AND NEDJOIO, following attempts to translate locality names in the Kimbundu language into Portuguese. We have used Nejoio to be consistent with existing scientific literature by Rodrigues et al.

Research on Nejoio was carried out thanks to kind permission of Soba (Chief) Nangolo of the Muhumbi People on whose land the complex lies.

The fieldwork and attendance by BORST and FINCH were sponsored by the SFC ODA GLOBAL CHALLENGES RESEARCH FUND.

The attendance of Peter Siegfried was supported by the HITECH ALKCARB project, funded through the European Union h+Horizon 2010 Research and Innovation Programme (#689909) 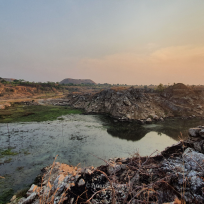 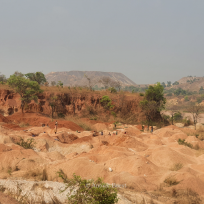 Sørensenite in analcime, under UV 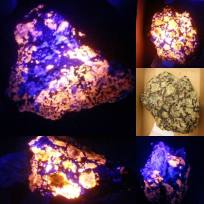 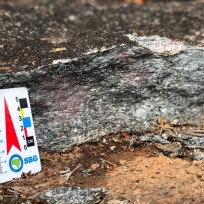 Pegmatite with red crystals of eudialyte in black sodic-amphibole. 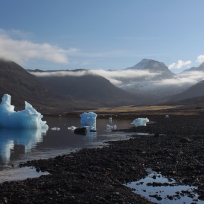 Scenic view in the southern part of the Illimaussaq Complex.